Home Behavior Problems Rottweilers lifespan: What is the life expectancy?

Rottweilers tend to have a shorter life expectancy than most other purebred dogs belonging to the same size and weight. This is certainly one of the most common questions that most Rottweiler fans tend to ask! It is definitely important to know how long will your rottweiler live, so as to make sure that you are able to spend some quality time with your dog.

The truth is that when we hear other breeds of dogs reaching such remarkable ages, such as 16 or 18, it feels really sad to know that a Rottweiler’s lifespan is just ‘too short’ in that comparison.

Rottweilers lifespan: Size is a determinant!

The Rottweilers breed is really large. It stands somewhere between 22 and 27 inches at the withers, and weighs anywhere between 82 to 130 pounds. The Rottweilers are powerful and robust dogs. However, this leads them to a threat wherein their body weight makes them sluggish than usual as they proceed to age.

Rottweilers, this, belong to the group of large/giant dogs. Data suggested that the average lifespan of the large dog breed happens to be somewhere near to 12.5 years. The average giant dog breeds live approximately 10.6 years. For these huge-sized dogs, it is said that reaching the age of 8 years will lead to a 12% chance of mortality from then onwards.

As the Rottweilers start to age, it is great if it gets diagnosed with the illness at an early stage. In such a scenario, it tends to have a higher chance of living longer. Rottweilers that lived well beyond the 8.92 years of their age are expected to live for quite a few more years.

Research and studies have revealed that an elderly rottweiler when diagnosed with cancer may pass away from the disease and it is 19% more likely than the one who does a natural death. A cancer resistance, thus, happens to be an essential factor in determining the age of a rottweiler dog.

Rottweilers tend to have a higher than average risk of getting a canine cancer. It is essential to understand that canine cancer is fairly common among the dogs. According to the Animal Cancer Foundation, it has been seen that 25% if dogs would develop cancer during their lifespan and Rottweilers are certainly not an exception to it.

A recent study was conducted in the year 2017, wherein it was found that 33% of the reported Rottweiler’s deaths occurred due to cancer and 7.1% were due to mass-associated complexities which were malignant. In a nutshell, it was perceived that more than 40% of the Rottweilers died due to cancer related troubles.

Rottweilers are known to contract aggressive forms of cancer, to which the treatment sounds to be almost unfavorable. Two of the most common forms of cancer concerned with the Rottweilers include Lymphoma or lymph cancer, and Osteosarcoma or Bone cancer.

A recent study showed a strong connection between the un–spaying of female Rottweilers and their increased lifespan. It is said that females who are left un–spayed until the age of 6 had a longer lifespan than the other dogs.

Such female Rottweilers were living till the age of 13 of 14 years, provided that their ovaries were left intact until they were 6 years. Researchers are still not sure if the same impact is true for male Rottweilers as well.

Who is known to be the ‘longest living Rottweiler’ so far?

Although the average rottweiler lifespan revolves somewhere between 8 to 12 years, the oldest known Rottweilers till date is Bort. He is 13 years old and lives in Holliston, Massachusetts. Searching across the web, there were several other Rottweilers who crossed a lifespan of 15 years or so, though that’s pretty rare! A YouTube video resembles a 15-year-old Bulgarian rottweiler as well.

How can you breed right to avoid early aging and death of your rottweiler?

With assuring the best quality of foods, and providing the right kinds of nutrition, you can increase the longevity of your dog and expect it to live longer. You should take enough care of its bones to make sure that it doesn’t develop bone-related complications by any chance.

A Rottweiler’s lifespan is also dependent on its genes. For such a dog as Rottweiler, which is prone to health problems, it is essential to make sure that it is bred right. A good dog breeder will ensure selectively breeding and health testing to prevent the passing of hereditary or congenital defects.

Genes play a vital role in determining the lifespan of your rottweiler, and thus, one should conduct health screening prior to breeding. Only mature specimens are to be bred.

How to make sure that your Rottweiler is healthy and lives long?

The first and foremost thing that you should keep in mind while bringing home your rottweiler is that you need to take enough care of it! Yeah, that’s a mandate, and you should have this mindset prior to owning one! 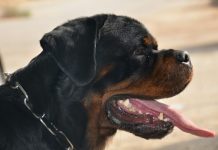 What Do Working Dogs Eat? 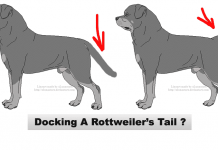