If there is one breed of dog that can act as perfect guard is the Rottweiler. Think about a scenario whereby you are in your business premise then a gunman enters with ill intention!

The video takes place in a pawnshop in Moreno Valley, Ca whereby a gunman seems to have invaded the shop with the aim of stealing from the owner. It appears that the owner of the shop might have first struggled with the gunman before his guard; the Rottweiler joins in with a marvelous helping hand. Even though there is no audible sound from
the video, we can clearly attest that there was a great struggle inside the shop. The guardian dog might have heard the struggles between the intruder and his pawnshop owner.

The brilliant dog didn’t hesitate to save the owner. The dog enters the shop bravely and went straight to the gunman who had already over powered his owner. The dog bites the back part of the gunman shirt and tries to pull him away from his owner. The gunman has put on a mask hence it won’t be easy to determine who he could be.

The great thing about the dog is that he understands that his owner is in great danger and that’s away he never gives up the fight. The intruder tries to run away and the amazing thing is that the business owner and the Rotty won’t let him go. They move from one corner of the shop and then the gunman tries to escape using a different entrance but the two great fighters; pawnshop owner and the Rottweiler won’t let that happen. Even though the stranger is
more powerful than the owner, the dog keeps on adding a helping hand. The video
ends when the dog is still on the gunman’s back and the owner is below him. But
you can see how Rottweiler is a great guard! 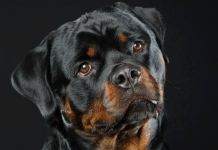 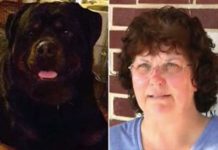